We’re potentially planning another jaunt overseas and I should probably finish this series before then, yeah?

This one’s gonna be quite lengthy, seeing as Florence is probably the most beautiful city of all time and easily our most action-packed stop. So buckle up!

It started with an overnight bus from Calabria. If you remember, the Panes and Ananias hail from way-south Italy. Getting north to Florence/Rome/anywhere else we wanted to visit was gonna take a while.

So we did an overnight bus.

To nobody’s surprise, it wasn’t the most restful sleep I’ve ever had, but I’d do it again in a heartbeat. It was ultra affordable and didn’t consume valuable tourist time.

The catch to that was arriving in Florence before anything—including our hostel—was open. Good thing Florence is the most beautiful and most walkable city of all time.

So we grabbed a quick breakfast and hauled Drew’s bag (mine was still MIA) to the Piazza del Duomo.

I could have sat there for hours, watching people walk to and from work, school, normal life PASSING THE MOST BEAUTIFUL BUILDING I’VE EVER SEEN like it’s no big deal.

As soon as our hostel opened for business, we trekked back to ask the front desk if my bag had been delivered. No such luck.

But holy smokes was our concierge the kindest man alive. He made several calls to both airlines, communicating in Italian to find out a) where the heck my bag might have been and b) if it would ever be delivered.

All efforts turned up squat, but he managed to boost morale with a laugh neither of us will ever forget.

When we realized I still didn’t have clean clothes, we hit up what I’m pretty sure is the Italian Forever 21 where I grabbed a couple shirts and some shorts.

I WAS A NEW WOMAN.

The rest of Day One was pretty low key, wandering around aimlessly, taking in the sights and smells before stopping for the best gnocchi of my life.

One of my favorite things about this stop: You would think the restaurants with that view charge an arm and a leg for just about everything—not the case. You can get amazing food just about anywhere, and they know that. If they want your business, they gotta be reasonable.

Looking back, I’m extra grateful we took our time with the first day, because Day Two was insane.

My friend Erika studied abroad in Florence and was kind enough to provide a slew of recommendations for food, sights and other stellar experiences. And for some reason I felt like cramming it all into one day.

Our first stop was Santa Croce. It may look like Saint Mary of the Flower (Il Duomo), but it’s actually older with a way better interior. In fact, it was the original Florence Cathedral before Il Duomo was built.

Fun fact: After the current cathedral was built, other major churches like Santa Croce were given the same marble facade.

Quite a few famous figures are buried at Santa Croce (like Galileo, what!), so we spent plenty of time perusing memorials, the Medici Chapel and the old Franciscan cloister.

After the church we were off to Palazzo Pitti and its adjacent Biboli Gardens. And I’ve never felt more like Marie Antoinette.

Well aware she lived in France, thank you.

BUT if you ever visit Florence and have time for Palazzo Pitti, make sure you tour the royal apartments. The art hanging on the walls is one thing, but the CEILINGS are a whole other story.

And below? Canvases covering every square inch of each wall.

Think we were done after a PALACE and its perfectly manicured GARDENS? Think again.

It was time to grab a bottle of champs, hike to Piazzale Michaelangelo and watch the sun set.

Every person who’s ever been to Florence will suggest you do this and they’re. not. lying.

Not only is drinking champs in the middle of a crowded park the bee’s knees, but just when you thought Florence couldn’t be any more breathtaking, it goes and does this.

We sat there just long enough for me to get just tipsy enough to talk a street vendor down from $25 to $20 for the cheapest purse I’ve ever owned.

The clasp broke two weeks later—but holy smokes was I proud at the time.

After that we grabbed some pizza, went home and probably died for a minute, our sleep was so deep.

BEAR WITH ME. Days Three and Four were much lighter.

The next morning started hot, with Drew barely catching a bus to the airport where he did actual backroom deals with the airline to pull my bag from a pile of other “forgotten” luggage.

But I’ll be damned if him walking toward our hostel with my belongings on his back wasn’t the most beautiful thing I’d ever seen.

Wearing my own clothes and my own makeup and smelling like my own girly deodorant (no offense, babe), I was ready for Il Duomo.

We’d booked our tour the night before, so we had ample time to stroll through the city and grab another awesome meal before finding our guide.

If you ever want to tour the Cathedral, I suggest these guys. Our guide was full of info and the secret terrace was no joke. You have a view few will ever experience.

Of course we kept climbing to the top! But it’s worth noting how narrow some of those stairwells are—especially when other people are coming down.

Our tickets also allowed us into the Baptistry and the bell tower. The latter was my favorite of the three. It’s way less crowded and the view was just as awesome. 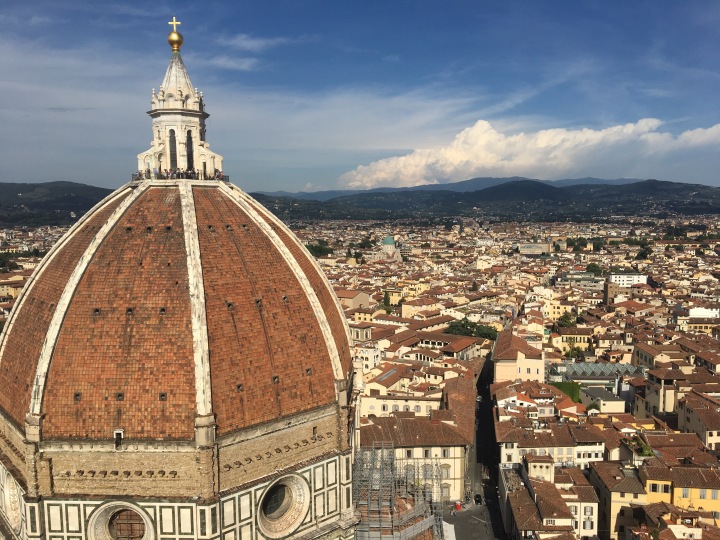 After one last Florentine dinner, we were back at the hostel, ready to re-energize for our final sight the next morning. 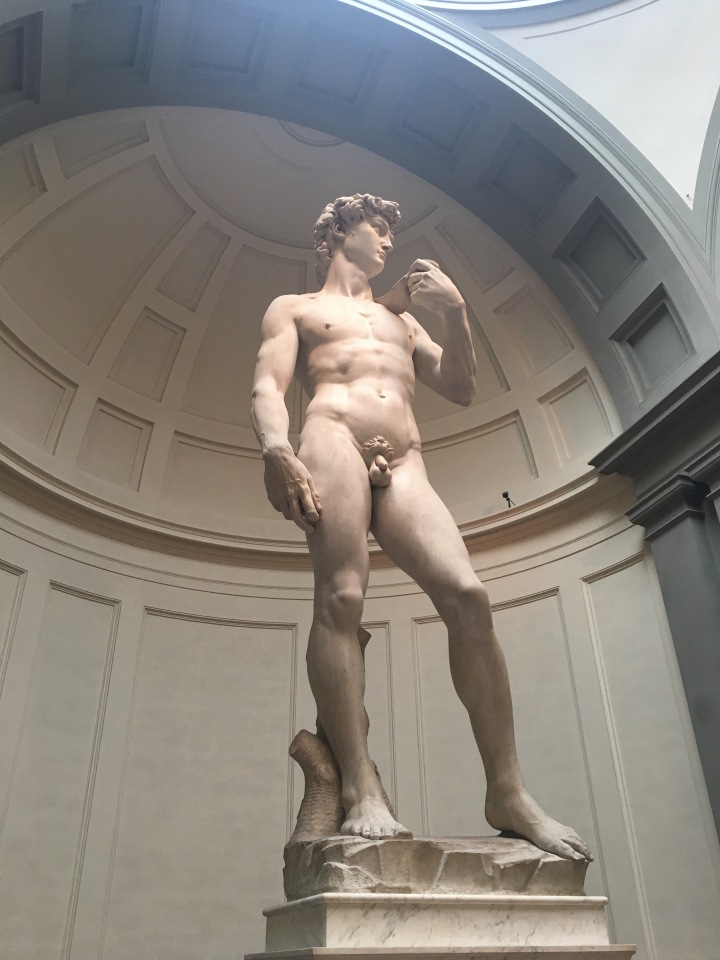 It’s the real deal. And people can say “Oh, there are replicas everywhere. Don’t waste your time standing in line. You can see the same thing outside at blah blah blah…” BUT THEY’RE WRONG.

You can see replicas all over the city, but the real David is incredible.

And as I sit here trying to describe it, I realize everything I say will probably sound sexual so get your heads out of the gutter and take the following words at face value: I was shocked at the size. I never realized how tall it really is, and every detail—every fingernail, every vein, every muscle—is literally perfect.

It’s something you have to see with your own eyes. And to know Michaelangelo touched the very thing in front of you is the craziest thing of all. Truly standing the test of time.

We buzzed out of there by 9:30, skipping all of the other art for the sake of time. Swung through an outdoor market and UGH do I wish I’d purchased more leather. Hindsight is definitely 20/20 on this one.

This has become insanely long and for that I apologize. The only other thing I’ll add is how much I wish we’d spent at least two more days in Tuscany, if for no other reason than to experience the countryside.

And one of those days could have been swiped from the Rome itinerary, but we’ll talk more about that later.

In the meantime, know Florence is a Top 3 stop in my book. Any questions, don’t hesitate to hit me up!

One thought on “Italy, Stop 2: Florence”